A field operational test was conducted in which a group of 108 volunteers drove, as their personal car, a passenger vehicle equipped with an adaptive cruise control (ACC) system. The advanced cruise control (ACC) system was incorporated into a fleet of ten passenger cars, each employing a grille-mounted sensor that detects vehicles ahead and controls both the speed and headway of the test vehicle so that the driver can proceed through moderate freeway traffic without adjusting cruise buttons or touching the throttle or brake.

The field test placed the ACC-equipped vehicles in the hands of 108 randomly-invited citizens for use as their personal car for two weeks for 84 of the driver/participants and, during the later stages of the project, 24 drivers were given the vehicle for a total of five weeks. In this manner, the vehicles were put into naturalistic use, without constraining where the person drives, or when, or how. Each driver was also free to choose between operating manually or with conventional cruise control during the first week and between manual or ACC driving during the second (or subsequent) weeks.

Figure 2 provides a conceptual overview of the FOT methodology. As illustrated in the figure, the work done to provide a test system has involved acquiring system elements, assembling ACC systems and installing them in the test vehicles, designing and building a data-acquisition system, and arranging for a pool of drivers. 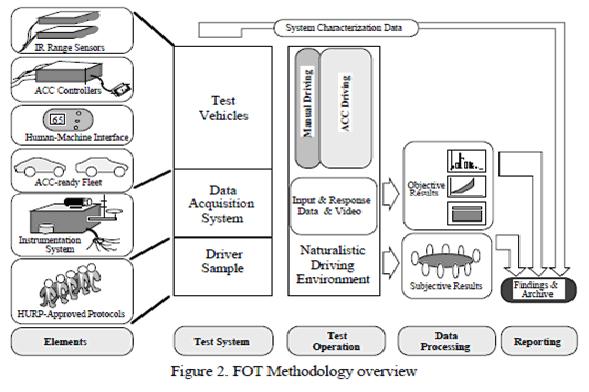 Key elements of the project approach:

The general goal of this project was to characterize issues that are fundamental to human interaction with an automatic headway-keeping system. In addressing this overall goal, the field operational test strived to:

Certain conclusions from this field test can be stated quite definitely. It is obvious that the ACC system worked very well, that people learned to use it quickly, and that its great appeal caused it to be heavily utilized. ACC usage definitely serves to lengthen typical headway clearances and even cultivates a less aggressive driving style in many persons. Thus it is easy to argue that ACC will become a highly successful automotive product, if attractively marketed.

The data also show surprisingly high levels of deceleration that prevail when the brake is used to disengage ACC. Less definite results that probably link with this observation relate to subtle aspects of human interaction with this system. Certain safety issues appear to be embedded within these subtleties, but their net effect cannot be predicted. What can be said is that product versions of ACC that incorporate braking are likely to amplify the significance of these subtleties beyond what was seen here.

Moreover, the “shared-control” nature of ACC driving seems to require that system designs be finely matched to the perceptual and cognitive behavior of drivers. Headway control is, after all, a safety-central task that intimately involves the driver in a way that also affects others operating nearby. While offering great promise for improving the quality of the driving experience, ACC poses an inherent necessity for human-centered design and does not fit a “business as usual” outlook for either automotive product development or highway operations.

ACC control is remarkably attractive to most drivers. Because ACC is so pleasing, people tend to utilize it over a broad range of conditions and to adopt tactics that prolong the time span of each continuous engagement. Notwithstanding some concerns, field test subjects were completely successful at operating ACC over some 35,000 miles of system engagement.

One also observes that the role played by the driver as the “supervisor” of ACC control entails some subtle issues whose long-term safety and traffic impacts are unknown. Thus ACC does not fit a “business as usual” outlook for either the auto industry or for highway operations. The “shared-control” nature of ACC requires a fine match to the perceptual and cognitive behavior of drivers, in a safety-central task that may affect others driving nearby. While offering great promise for improving the quality of the driving experience, ACC implies an inherent necessity for human-centered design.

1. The strong attraction of ACC seems to be explained by:

2. These relief mechanisms prevail only when the driver “lets ACC do it.”

3. Certain observations confirm that people are rather strongly disposed to let ACC do it, namely:

4. The driver’s ability to retain a vigilant, cautious driving style when in ACC engagement is questioned by such observations as:

The ACC system studied here can be described in terms of the sensor, the commander/controller, and the driver's interface. The sensor is an infrared device that measures distance and the rate of closure to vehicles in the lane ahead, steering its sensing beam to the right or left as needed to follow lane curvature. The commander/controller acts on the sensory data to modulate the throttle and also downshift the transmission as required to satisfy the driver-selected minimum for headway or spacing to a vehicle ahead. Since brakes are not incorporated into this ACC system, the vehicle has only modest deceleration available for controlling headway — a characteristic that is believed to figure strongly in the field experience reported here. The driver selects among three minimum headway buttons ranging from “closer” to “farther” and otherwise operates the ACC system through the normal cruise control buttons located on the face of the steering wheel.

The vehicles procured for this project were ‘96 Chrysler Concordes. The Chrysler Concorde is a five-passenger sedan which belongs to the family of Chrysler LH-platform cars. This family also includes the Dodge Intrepid, Eagle Vision, Chrysler New Yorker and Chrysler LHS. The New Yorker and LHS have bigger trunks and C-shaped C-pillars, but other than these features they are mechanically similar to the other cars.

The primary motivation for using the Chrysler Concorde as the FOT vehicle platform was based on ADC’s prior experience with integrating an ACC system onto the Chrysler LH platform. Early experience indicated that a careful tailoring of the ACC application to the selected vehicle must be made if good performance is to be ensured. Tailoring requires suitability of the electronics interface and matching of the control system parameters to the longitudinal response properties of the vehicle. ADC’s earlier integration experience with the Chrysler LH platform was found to be most helpful during the pretesting task of designing the system’s installation.

To facilitate the exchange, validation, and analysis of the FOT data, all nonvideo information on vehicles and participants was loaded into a commercial database format (Microsoft Access). The term “Archived ACC FOT Database” refers to a logical or conceptual data set, not to a single database file. The database files for each individual driver were burned on CDROM and delivered to the evaluator’s on-site representative usually within a week of each car’s return. A second “UMTRI ACC FOT Database” was developed from the same files by reorganizing and recombining the original database files to optimize query development and execution.

Finally, this reorganized database has been augmented with new tables as new processing methods have been developed. 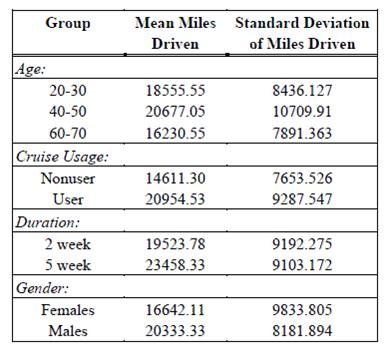 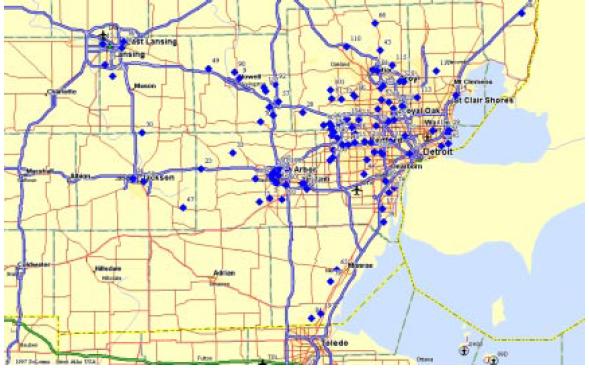 A goal of this FOT was to assess the influence of ACC on the driving task. A variety of data-processing procedures were employed to make this assessment. These procedures ranged from examining signals derived in real time by the DAS installed in the FOT vehicles to investigating time-indexed records (i.e., time histories) stored in a database format for enabling flexible query generation and data interconnectedness. The data processing fell into two general processes. The first involved the real-time, on-board processing of the primary and derived signals into histograms. The second was the cleansing, manipulating, and reduction of time-history signals such as velocity, range, and their derivatives. Histograms were created both on-board the FOT vehicles as the data were collected and also generated after the fact using the stored time-history records.