euroFOT identified and coordinated an in-the-field testing of new Intelligent Vehicle Systems with the potential for improving the quality of European road traffic. This permitted assessing their effectiveness on actual roads, while determining how they perform towards the intended objectives. The field testing offered an early publicity of the technologies, and enabled the analysis of the user acceptance and its subsequent potential for market penetration.

Led by Ford, the project involved 28 partners, including major European vehicle manufacturers as well as leading automotive technology suppliers and research institutes, which worked together over a period of 50 months.

A selection of 8 systems has been tested in over 1000 vehicles from 9 European OEM brands.

Key milestones of the project

The geographical coverage of the euroFOT project was Europe wide.

Depending on the level of consideration, different namings have been used:

Vehicle Management Centre: The VMC is an entity which can be seen as the overall management entity. Each VMC represents a country in Europe.

There were 4 VMCs in the euroFOT project:

Operation Centre: An OC is a sub-entity of a VMC dealing with the operational management. one operation centre groups together different operation sites because they are connected through one or several aspects of the organisation (common data servers, common data acquisition system, common organisation)

Operation Site: An operation site is directly linked to an OEM. It deals with the site management and the OEM specific aspects (maintenance, dealers, ...). One operation centre may have one or more operation sites depending on the location of the dealership.

As an indicative number, there were 11 Operation Sites: 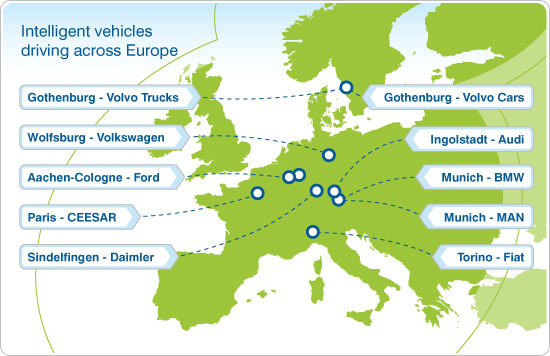 For over twelve months, one thousand cars and trucks equipped with advanced driver assistance systems travelled European roads, and, for most of them, at each turn, acceleration, and lane change, their movements were tracked and recorded. The field test focused on eight distinct vehicle functions that assist drivers in detecting hazards and avoiding accidents: Adaptive Cruise Control (ACC), Forward Collision Warning (FCW), Speed Regulation System (SRS), Blind Spot Information System (BLIS), Lane Departure Warning (LDW), Curve Speed Warning (CSW), safe human/machine interface and Fuel Efficiency Advisor (FEA). More than hundred terabytes of data were collected and analysed, providing the basis for the euroFOT consortium to assess the impact of these systems on our roads.

If widely deployed across the EU, the systems studied by euroFOT could potentially reduce accidents and resources. The socio-economic assessment reveals a cost benefit ratio of 1.3 to 1.8 for ACC in trucks.

The FOTs were operated on fleets managed by the 4 Vehicle Management Centres (VMC), corresponding to the 4 countries: Sweden, Germany, Italy and France. The German VMC was constituted of 2 Operating Centres (OC) (Munich and Aachen).

A piloting will be organised in order to check the complete data chain and also organisational aspects of the Vehicle Management Centers.

French VMC: Cars are driven without using the system during 12 weeks, 10 weeks with the driver's car, 2 weeks with CEESAR's heavily equipped car.

German VMC - OC2: 1 month baseline without the system, 2 months with the system.

Swedish VMC: For the passenger car trials, the baseline will last 20 weeks.

German VMC - OC1: data will be transferred via GPRS.

Italian VMC: No data loggers will be used, all datas will be collected through anonymous questionnaires (paper and on-line).

Swedish VMC: The datas will be either wirelessly transferred or picked up on hard drives.

Raw data are both in-vehicles signals and signals from extra sensors and video cameras, collected from the vehicle during operation (objective data) and the questionnaires answered by the driver during the FOT (subjective data). Data are transferred from the vehicles to the storage system at dedicated servers wirelessly (e.g. through GPRS- or UMTS-services) or through direct upload, performed by operators who access or even exchange the physical storage media in the vehicles. The following categories of raw data are considered:

Raw data need to be converted into other formats to be used for further analysis by specific software routines. Extensive computation is also needed for data synchronisation, video encoding, creating derived measures (combining two or more signals) and data reduction (creating events for specific interest). During the pre-processing, the data is enriched with additional information such as road classification, weather, traffic load, etc. For subjective data, the paper based questionnaires are converted to digital form. For video data, a complex process is needed to extract and annotate situation data without looking at the full content in real-time.

For more details on the data collecton, you can refer to the dedicated project deliverable:

Instead of providing aggregated data on a public website for download for one year (i.e. publishing the data) the granting of access is now based on a research proposal that will be reviewed by owners of the data. Research proposal are addressed to the Management of euroFOT (see contact at http://www.eurofot-ip.eu). The accessible content, after successful review of the proposal, represents the large body of data that has been analysed to derive the results obtained in euroFOT. An exception has been made not to provide personal data, such as video and GPS position, as this would require the acceptance of all FOT participants. The site of access is at the site of the owner of the database and stored results can be extracted after their content has been reviewed and checked against the research proposal. All costs for the access - like training session, operator, and consumables - will be agreed upon before the analysis is started.

The access to the data ends one year after end of project that is June 31, 2013.

Exposure time depends on the functions. It varies from 4 months to 1 year.

French VMC: An hotline will be available for the drivers.

German VMC - OC1: Ford will open an hotline, VW will use the usual dealer procedure to contact customers.

German VMC - OC2: The driver liaison principle will be used, meaning that specific persons will contact the driver. This contact will be done at least at the end of each session (every month) and may take place every two weeks for an informal discussion with the driver. The responsibility for driver liaison will be shared between the partners depending on practical considerations (e.g. residence of participants).

Italian VMC: A driver liaison centre/help desk will be established by the Italian partners.

Swedish VMC: The driver liaison will be OEM based and as limited as possible to let the drivers "forget" that they are subject of a study.

Invitation to the final event: http://youtu.be/MB4I1iuBDJQ