An alternative to fixed speed limits is dynamic speed limits. With variable speed limits, we mean a temporary speed limit, which differs from the permanent speed limit and is set depending on current traffic and environmental conditions. The aim is to improve road safety and traffic flow and to minimize the environmental impact or to improve user acceptance. Also combinations of these goals can be pursued.

The use of dynamic speed limits to shorten the travel time in off peak periods (FOT A1) achieves this goal. After applying the dynamic speed limit the travel time was decreased with 7%, this was beneficial for 39% of road users. An increase of NO2 emissions (0.75 μg/m3) and PM10 emissions (0.1 μg /m3) is very limited compared to the limits (40 μg /m3). The noise level per day increases by 0.3 dB (0.4 dB for the night period) and there was no measurable (negative) impact on traffic safety. If deployment is considered for this application, the (local) limits relating to air quality, noise levels and traffic safety and communication regarding these issues to residents should be taken into account.

The use of dynamic speed limits to improve air quality (FOT A58) resulted in the number of days exceeding the concentration norm of PM10 being reduced by 1.9 days from 24.4 to 22.5 days. The traffic contribution of particulate matter and NOx emissions appears to decline by 18%. The effect is smaller than expected because the average speeds remain significantly (10 to 25 km/h) above the speed limit of 80 km/h. In general, the use of dynamic speed limits to reduce the annual number of days the concentration norm is exceeded can only be successful when the traffic emission as part of the total concentration is relatively high and the current number days in exces of the concentration norm is less than 40. A better chance to succeed has the application of dynamax for the reduction of the air quality at locations with an excess of the annual average NO2 emission norm. This measure has a larger scope of application, because the contribution of NO2 traffic emissions to the (measured and calculated) total concentrations is larger. Strict enforcement is a prerequisite for effective use of the measure. Side effects are an increase in travel time by 10 to 15% and a limited (positive) impact on traffic safety and noise emissions. No additional traffic jams will emerge. 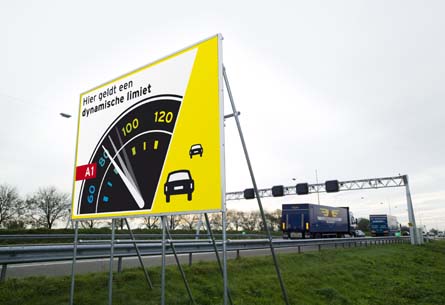 Dynamic speed limit on the A1 highway

The use of dynamic speed limits to improve traffic flow while preserving the positive effect of the 80 km zone for the local air quality (FOT A12 Den Haag - Voorburg) resulted in a decrease of congestion. The average number of vehicle hours lost during the evening peak decreased significantly from 622 to 215 hours. The air quality remains the same at one measurement location (in a residential area) and increases slightly at two measurement locations (near the Prins Claus Plein and the A12 junction with A4) by a higher traffic emission contribution due to the higher speed limit. This change of air quality however is smaller than the error margins of the model. The noise level appears to increase slightly by 0.2 dB and this effect is also smaller than the error margins of the model. Traffic safety does not change significantly.

An important topic regarding traffic behaviour and human factors is the reduced compliance to speed limits below 100 km/h. This is particularly attributable to situations where the speed limit does not match the current road and traffic situation from a road user’s perspective, a so called 'non credible speed limit'. In such situations compliance can be increased by indicating the reason for the desired speed adjustment on a variable message sign (VMS) accompanied by enforcement. The argumentation for throughput and air quality in such situations must be improved.

Based on the evaluation results it is recommended that a plan for further development and application of dynamic speed limits will be developed.