Timing and duration of tests

Passenger cars, on inter-urban or urban roads or on motorway traffic

The driving in the vicinity of certain object of warning was compared for same test user without and with the cooperative driver support service. Analysis on driver behaviour was made first per test site and speed limit, later analysing the impacts over all data.

Number and make of vehicles

Description and number of participants/drivers

180 in total over all test sites 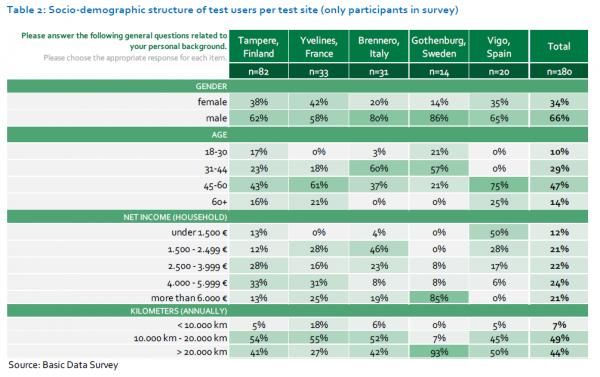 The test site located in Tampere (Finland) consisted of two and four lane streets, carriage ways and short legs of motorway. The speed limits were from 30 km/h to 100 km/h on the motorway. The route and test times were selected so that traffic volumes were generally quite low.

The SimTD test site was located in the Main-Rhine area of Hessen (Germany). The area is characterised by high traffic density and therefore has allowed experiments on all roads with safety and traffic efficiency functions under normal everyday conditions. The test site included several scenarios: • Motorway scenarios (192km - A3, A5, A661, A648). • Rural road scenarios (106km - B3, B455) and • Urban road scenarios (92km – in Frankfurt/Main centre). The entire test site included a test area of about 650 km² and 390 km of public routes.

The Italian Test Site was located near Trento in northern Italy, along the A22 motorway, a toll road with 2 lanes per direction, connecting Italy with northern Europe. The motorway was already equipped with ICT infrastructure for mobility. The Test Site is a 9km long section between “Rovereto Nord” and “Rovereto Sud” toll dedicated to cooperative applications.

Swedish test site in Gothenburg applied the principle of naturalistic driving thus not limiting the area of tests. Nevertheless, the frequently used commuting routes formed major part of their data (journeys between Volvo in Gothenburg and test users homes south of the city). All road types were included.

For the French test site in Versailles, in the case of controlled tests the test drivers were driving on the same road itinerary for around 45/50 minutes (40 km). The itinerary went through semi-private roads, country roads, motorways and urban roads.

Some tests conducted on test tracks due to their risky nature (e.g. including emergency braking in queue)

Between April and December 2013

For traffic efficiency impact assessment: For TJAW simulations, the VISSIM 6.00 was used. VISSIM is a microscopic simulator of traffic with a fine discretization in time (up to 10 steps per simulation second) where vehicles on a motorway obey car following rules as per Wiedemann (1974) and lane changing rules as per Sparmann (1978).

The evaluation of GLOSA used the V2X Simulation Runtime Infrastructure (VSimRTI) (Schuenemann, 2011), which was built to support users performing V2X simulations while maintaining the flexibility to choose which simulators should be used. In particular, the simulators used are: (a) SUMO as a traffic simulator (Krajzewicz, 2012), (b) JiST/SWANS as a communication simulator [JiST/SWANS], and (c) the VSimRTI native application simulator.

For the rural and motorway scenarios, TNO has used their in-house microscopic simulation tool ITS Modeller NG. This tool has been designed specifically for the analysis of ITS systems and their traffic effects. One of its distinguishing features is the ability to create, select and configure user-defined driver models and plug them into the simulation via a user friendly GUI.

Environmental impact assessment: PHEM was used for simulation of environmental impacts. For simulation of emission factors PHEM offers a predefined set of “average vehicles” representing average vehicles for all relevant vehicle categories. In DRIVE C2X PHEM calculated emission levels based on detailed vehicle speed profiles. Before the actual simulations PHEM was updated to include the newest measurements on EURO 6 cars and trucks and to include also generic models for advanced technologies (hybrid cars and buses, CNG and start/stop systems). All data was stored in a predefined data base for PC, LCV and HDV for Diesel and Otto engines to allow user friendly calculation of average emission values from the vehicle fleet.

Specifications for the data sources

Questionnaires before and after the tests, focus groups, user panel

Issues that affected the impact assessment

Generally a high acceptance of the system could be noted. 91% of the respondents stated that they would use the system if it was available in their cars. The willingness to purchase the system as special equipment was comparably low with 42% agreement. The most preferred functions were Approaching emergency vehicle warning and Green light optimal speed advisory which were also the only functions that exceeded the expectations.

The driver behaviour results showed that for most of the functions, changes in driving behaviour were observed that were in line with the intended changes. The functions were primarily safety functions, and the impacts, when found, were mostly changes in speed, and its derivatives. No changes in strategic behaviour (route choice, mode choice) were found due to the nature of the functions. The data was successfully pooled over test sites to strengthen the statistical significance of the tests. Relevant and statistically significant results were found for In-vehicle signage / speed limits and some of the other signs, Obstacle warning, Road works warning and Car Breakdown warning, Green light optimal speed advisory and Approaching emergency vehicle. Furthermore, the objective driving behaviour results were in line with the self-reported driver behaviour.

The main safety results showed that the functions affected traffic safety in a positive way by preventing fatalities and injuries. The most effective functions from the safety point of view were In-vehicle signage/ Speed limit and Weather warning. The next were Electronic emergency brake light, Traffic jam ahead and Road works warning functions. However, even the GLOSA function developed primarily for improvement of environmental impacts enhanced safety slightly.

The traffic efficiency impacts examined three functions for which effects at the traffic flow level could possibly be observed. Traffic jam ahead warning, Green light optimal speed advisory and In-vehicle signage/ Speed limits were analysed with traffic simulation. The main results showed that delay increased for Green light optimal speed advisory and In- vehicle signage/ Speed limits, due to reduced vehicle speed caused from either the speed advice or to stricter enforcement of speed limits. The Traffic jam ahead warning did not show any statistically significant changes in traffic efficiency. The traffic efficiency simulations showed the role that traffic conditions play in determining the overall effect of functions. In peak traffic conditions, the ability to choose one’s own speed is diminished; the interaction with other drivers determines the overall speed driven, regardless of the advice provided by a DRIVE C2X function.

The environmental impact assessment of the functions Green light optimal speed advisory and In-vehicle signage/ Speed limits showed reasonable reduction potential for energy consumption and emissions. For Green light optimal speed advisory the reductions resulted mainly from the optimisation of the speed to avoid unnecessary braking and acceleration manoeuvres. For In-vehicle signage/ Speed limits, the influences on emissions resulted from a general reduction of the velocity. The Traffic jam ahead warning function had only very local effects since it influences mainly the deceleration area upstream of a traffic jam. The influence on fuel consumption and CO2 emissions from TJAW is rather positive due to an earlier speed reduction.

The main results of the mobility impact assessment showed positive implications for the quality of travel. The cooperative functions did not have implications for the amount of travel or travel patterns on the personal level, except for In-vehicle signage/ Speed limit which lead to such a decrease in average speed resulting in an increase in duration of the journeys.

Other things to report